If You Tell: A True Story of Murder, Family Secrets, and the Unbreakable Bond of Sisterhood by Gregg Olsen

This is a crazy good book by Gregg Olsen about a really dysfunctional family that becomes painful at times to read. The more you read, the more you see it going off in the ditch. You can’t help but watch the train wreck though. The main twistee, Shelly, is a real piece of work. She loves to inflict maximum punishment and humiliation on her victims, who are her own three children, along with a young male nephew she’s taken in, along with her former hairdresser Kathy, who moved in to help out at a time she needed a place to stay.

This is the best of true crime, and it’s hard to put down, wanting to see what’s going to happen next. I really enjoy this author’s non-fiction work, following him for many years. 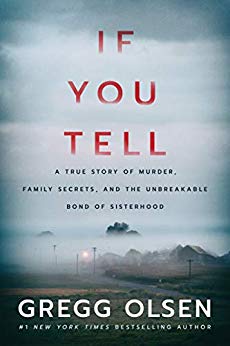 The Author- #1 New York Times and Amazon Charts bestselling author Gregg Olsen has written more than thirty books, including Lying Next to Me, The Last Thing She Ever Did, and two novels in the Nicole Foster series, The Sound of Rain and The Weight of Silence. Known for his ability to create vivid and fascinating narratives, he’s appeared on multiple television and radio shows and news networks, such as Good Morning America, Dateline, Entertainment Tonight, CNN, and MSNBC. In addition, Olsen has been featured in Redbook, People, and Salon magazine, as well as in the Seattle Times, Los Angeles Times, and New York Post. Both his fiction and nonfiction works have received critical acclaim and numerous awards, including prominence on the USA Today and Wall Street Journal bestseller lists. Washington State officially selected his young adult novel Envy for the National Book Festival, and The Deep Dark was named Idaho Book of the Year.
A Seattle native who lives with his wife in rural Washington State, Olsen’s already at work on his next thriller. Visit him at http://www.greggolsen.com.

Tranquil notions, melange of sterile musings & a pinch of salt

A gateway to deep insights and short aphorisms

A blog of comfort during unpredictable times

I speak my heart out.

happiness is reading books in bed

Book reviews and previews from an avid reader!

Chapters of my life

How To Prioritize Yourself—a smart path to life and love.