This was a good true crime book by author David Parrish that’s coming out next month (April 2020). It certainly got my attention and kept me involved with the story of twin brothers Mickey and Jon Bowie, who were at a party in a motel room one night when the cops were called over a noise complaint. There were a group of others there that night too, but the twin Bowie brothers ran afoul of the anger and received the brunt of the punishment of the police that night. It was really over the top. The aftermath left ongoing animosity between several of the cops and the underage partiers. The twins, with Jon in particular, was being harassed daily. Tt gets really twisted a few nights later when Jon is found dead, and the mystery is on to figure out how it really happened. Many twists in this true crime book. Advanced electronic review copy was provided by NetGalley, author David Parrish, and the publisher. 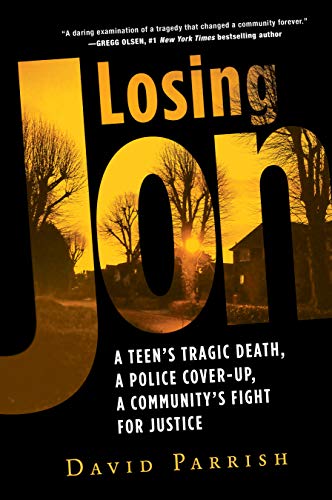 The Author- David Parrish is a semi-retired technical writer and first-time author of the non-fiction book, LOSING JON. He writes about witnessing the unexpected twists and turns of a disturbing and often-frightening journey through the criminal justice system and beyond. It takes place in Columbia, Maryland, a planned community once advertised as New America where he and his wife raised their two sons and still live. He grew up in a blue-collar family near Durham, North Carolina, graduated with a B.A. in English at the University of North Carolina, married his Ohio-raised wife, and followed a public health job to Jackson, Mississippi. He then switched careers and moved with his wife and sons to Maryland, halfway between their Ohio and North Carolina families. Three or more days a week he commutes – usually top-down in his aging green Mustang convertible – the short distance to his network security writing job. The rest of the week he does chores, plays golf, occasionally fishes a local reservoir, and meanders through county backroads on his Mustang-matching-green, retro Triumph Bonneville motorcycle.​

Pursuing The Global MBA: A Personal Documentation On What Makes The Good Life.

Seeking Solace in the Horizon of Life & Beyond.

Beyond the Crypts and Castles
khayskona.wordpress.com/

"welcome to the world of a bibliophile; a girl trying her hand at this adulting thing"

Writer of fiction: Irish Terrorism and the lives it damages.

- a place for reflection , thinking & sharing.

Look into our mirrors...You will see the most amazing things...

Your dedicated source of all things rum. Reviews, ramblings and obscure folkflore guranteed.

Reading In the Garden
Raggie Writes

The Broken Inside of Me

Secrets, Betrayal, Romance & Love, combined are the pieces of me

Nourish Your Body. Nurture Your Mind. Inspire Your Soul

Your Brain is a Radio that Does What its Told

Musings and books from a grunty overthinker

Philosophy is all about being curious, asking basic questions. And it can be fun!

A guide for teachers tackling the professional world of Education.

BOISE MURDERINO
Movin' it with Michelle

All about art and literature